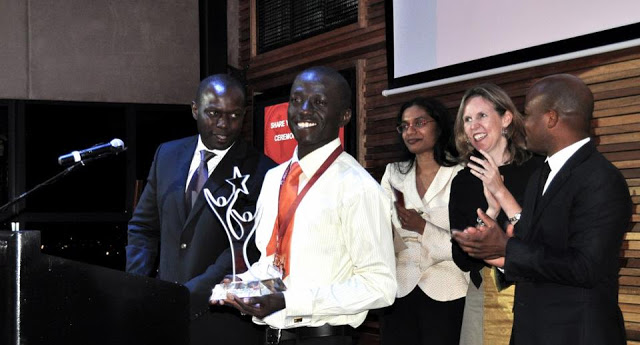 I am doing a Debate Class
with the US Mission Uganda. (Working on my speech courtesy of the best:
Michelle and Barack Obama while using State Department Funds). In preparation
for the this week’s class, which was on Economics, we were told that  we would
get to meet a young entrepreneur. That he was Ugandan and had recently been awarded in South Africa were  the clues. Only two of us in a class of 19 were able to guess. Andrew Mupuya was the young entrepreneur. Before 20th February 2013 I had never heard of this young man.

Enter a young
gentlemen. He was clad in a pink shirt and purple tie: with little grey prints
and black pants.  He would easily pass
for the very normal average Ugandan that you would occasionally meet on the
streets. He was from meeting the American Ambassador to Uganda. But as he began to speak, I was in awe.
He shared his story with us:
‘I started out in secondary school after the
government put a ban on ‘buveeras’ (Plastic polythene bags). After the
ban, I decided that I wanted to create a solution. Paper-bags. I made a
business plan. To start out, I needed 36,000 Uganda shillings. So I collected
70 kgs of used mineral water bottles to raise capital. But I raised only
28,000/-Uganda shillings. My fellow students and teachers thought that I was mad. To top up
to fit my plan, I borrowed the remaining 8000/- from my teacher. I sold a ream
worth of paper bags every 3 weeks and from each ream, I earned 20,000/- worth
of profit. This I put back into my business.’

This young gentleman studied at one of the biggest
USE (Universal Secondary Education) schools in Kampala. Kololo SS. Because it is USE, the students study half  day to be able to have everyone attend class. this worked to his advantage, his fellow students were his first employees.  After high school, the brother that he was
staying with sent him away back to the village because he had finished school and there was no money for upkeep. 3 days later he came back to
Kampala. He wanted to build the market and the product as well.

5 years down the
road, he owns a company called YELI (Youth Entrepreneurial Link Investments )
hence Yeli paper bags. He currently employs 16 people, the oldest a 53 year old
father and the youngest a 19 year old girl. When registering his company, he was
told that his was a first of its kind. Through his business he was able to pay
all his tuition for his degree course in entrepreneurship.
Challenges:
Peer influence:
‘Even my teachers told me that I was going to fail
class. But I had a weekly timetable and that is how I made it.’ He says.
Understanding of the market and product:
‘When I started out, I wanted to grow the market.
But then I realized that I needed to work on making the product better.”
Source of materials:
‘I used to buy paper from Nasser road in Kampala.
But the suppliers were not reliable. I am now importing from Nairobi. That in
itself is a challenge because while it is cheaper to buy paper from Nairobi, it
becomes expensive because of corruption when paying taxes at the boarder.’
Competition:
‘My biggest competition is from Kenya. It is group
of Indians who use machines. My employees use hands. Once I went to visit their factory in Kenya, but they would not let me in.’
Awards received:
2011: Business Plan writing competition by the
International Labor Organisation.
Over 300 people applied, 60 got picked. I had an
advantage because I had a clue. I emerged the winner and was given $1000. This
is what I used to buy furniture.
2012: Anzisha Prize (African Leadership Academy)
Andrew was part of the 270 applicants from 32
countries. As one of the 13 finalists, his premises and business was visited
and employees interviewed. He was later taken to South Africa for the face to
face interviews.  There were 3 sections of judges.  He
emerged the winner and was given $ 30,000 which he is receiving in bits to help
him in his business. With that money, he plans to build premises for his
business.
2012: Social Entrepreneurship Award. (FERD and
JA-YE)
Eligibility was 15-45 year olds from all over
the world. Out of the 17 semifinalists worldwide selected, he was one of the 4
finalists. He beat finalists from the United States, Norway and Sweden to emerge
the winner. He will be traveling soon to Norway and Latvia to receive the
award soon at this year’s European Trade Fair.
Training
Andrew loves to share his skills and information. He
says that he has trained over 500 people so far. Some of the people trained are
from Ghana and Zambia which he has done via Skype. ‘I have trained so many people. Some of whom quickly leave to go and start out their own paper bag business. But after 3 weeks they come back to me saying that they have failed. I teach the skills, but I cannot give them the entrepreneurial  mind and spirit.’
Future Plans:
Andrew hopes to start recycling paper next year. But
to do that, he needs bigger premises. However he is currently doing a training
with Uganda Research Institute on recycling paper. The small cuttings that are made when making the
initial bags are what he wants to start recycling next year. He has been
keeping all of them.
Words of wisdom:

Uganda has a very high business acumen, but very low
business sustainability he says. It also has the highest number of start ups
but they all fall through before their second birthday. And this is because ‘We
do not forecast, we do not plan’. So if you want to make it, have a plan and follow the plan however small it is.