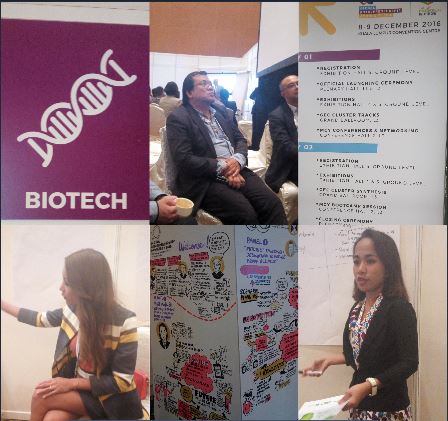 For the longest time I have had no regard for thinking about Bio energy. Until Recently.  One of the organizations in Kampala Konrad Adeneaur Stiftung showed the Climate Change Documentary ‘Before the Flood’  right after its release and I went to see it.  I am a believer in keeping the environment – so much. But it had never been practical for me.  I didn’t think it was my place or role to be in.

Fast Forward I am attending the Global Entrepreneurship Community in Kuala Lumpur and I am slotted into the Renewable Energy – Fuel Cluster under Biotech.

Being from Uganda – we rarely talk about renewable energy.  It is not a ‘big issue’. We still have education & health as our priorities and every now and again – the government will add Security.  So renewable energy & bio technology is not one of the priorities, not a conversation starter at all.  And this we found to be the same experience with the different countries that were represented in the Cluster especially Singapore & Cambodia. Malaysia was ahead because they have the Malaysia Bio-economy Corporation whose main mandate is to invest in bioeconomy whilst supporting communities and companies doing the same.

What is our Role?

Raising awareness on what renewable energy is, is very pertinent to our society’s growth especially in this era where we are also talking about Climate Change. We all agreed that awareness was of paramount importance. We agreed make that or mission. Using all types and kinds of Media and off course linking it to the Paris COP 21 Climate Change agenda – our initiative was not only timely but very legitimate.

The other thing that we felt important to do would be highlighting the amazing work that is already being done though largely on a small scale.  A young lady from Singapore – told us of the startup that she is working with that mainly is using the Water Lily or Water hyacinth to make charcoal.  There is technology that can convert water hyacinth into charcoal briquettes ideal for, among other things, household cooking and grilling. The briquettes burn clean with very little smoke, and so are advisable to use because they are clean energy.

Harvesting the plant then for charcoal briquettes is a brilliant idea especially since we know that it works. This best practice that has been shared and practiced globally but mainly on a small scale. And it comes as an oasis of hope, progress and development for many that are close to fresh water bodies that have that sea weed.  But we need to work towards making these stories known – something that the Global Entrepreneurship Community is heavily invested in. I know so because I am doing just that!

Many thanks to Scope Group for allowing me to be a part of this!