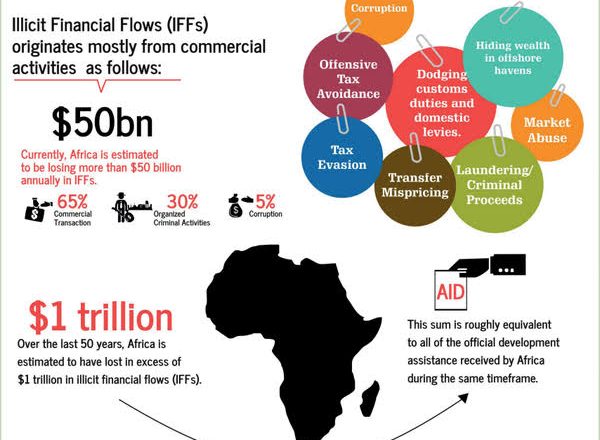 A lot of noise has been made about Illicit Financial Flows (IFFs) in Africa since the highly celebrated report by the Thabo Mbeki High Level Panel came out. The report in short lists how much money is lost by Africa to Multi National Companies in Africa and Aid Agencies through Commercial transactions, organised crime and corruption .

There has been criticism however that little is said about the nature of IFFS, and the impunity of high ranking government officials and the role they play in how IFFs thrive.  For example, a lot of money is lost through commercial transactions which are as a result of corruption .

This Report has come back this year into the limelight because 2018 has been the year of Anti Corruption in Africa, a theme decided on by Heads Of State of the African Union.

IFFs are a result of grand corruption on the continent we all must agree.  So I was thrilled to listen from Mr Logan Wort from the African Tax Administration Forum at the High Level Dialogue on Democracy & Governance Trends in Africa.

Mr Wort tried to explain a few things about the Multi National Companies(MNCs) involvement in IFFS and how Africans need to stand up with or without their governments to address these issues. (Governments in most times are accomplices).

“After the level of MNCS, the big issue there is, is the 65% of IFFS that we get : and a lot of this happens through trade mis pricing and transfer pricing which is a lot of technical stuff. Essentially it is hiding profits and shifting profits through inter company movement of money in a very basic way.”

Pretty straightforward huh? I thought so.
He goes on ahead to give a way forward.

Because even though this report was overwhelmingly endorsed by the AU at its 24th Ordinary Session, we need to see more action.

“Our job is not only to say you’re doing it, you are doing it, out job is to find the mechanisms to expose that. So what have we done?

We have created African standards – how to deal with inter company transactions.” Mr Wort said.

A little bit of research and I find that ATAF has put together a Toolkit on Transfer Pricing Risk Assessment for different sectors – information that is readily available on their website especially on how to train in that regard.

It was also good to note that some governments have taken heed and are actually trapping big from just using these Transfer Guidelines.

“Zambia has adopted the ATAF transfer regulations. And as a result, have just gained $6million from a company for incorrect filling and declaring falsely.

In Nigeria, they made a simple change to the legislation and simply in the law changed the burden of proof and that has changed the fortunes of Nigeria ‘s income because it has reduced the ability of companies to make false declarations.” Mr Logan Wort explained.

So these regulations work. If we have the right people in the right positions asking the right questions to MNCs, then we could see a decrease in corruption but also IFFs leaving Africa.

Change of mindset is important but also political will is paramount.

Now you may wonder, why I dwell on this. I do because we increasingly have seen a lot of mistrust with governments and citizens. Why? Because citizens don’t see the correlation between their taxes and development in their countries. I come from Uganda and Ugandans have been fighting the Social Media OTT tax and Mobile Money Tax that were instituted July 1 2018. And yet fighting off IFFs is so that governments can see the more tax revenue from MNCs who we know to be the biggest culprits.

“Tax revenues when used for public and social good cements the contract between the state and citizens. Tax revenue is supposed to be that important tool that allows for income redistribution in unequal societies. Sadly on our continent we do not see that tool being used as one that tries to equalise society.” – Mr Logan Wort noted.

I would very much love to hear that Zambia has used that $6million for public good.

“When we have a good tax compliance culture people are less likely to be corrupt. When tax money us spent to the benefit of the people & the people can see the wealth and the health created by their tax money, the need to be corrupt and to get things by alternative means reduces.”

These practical examples that show that : IFFs can be reduced. Governments can use their powers to tame MNCs and because they benefit a lot from our economies tech will most definitely comply. But first we must do something, we the citizens and we the governments.