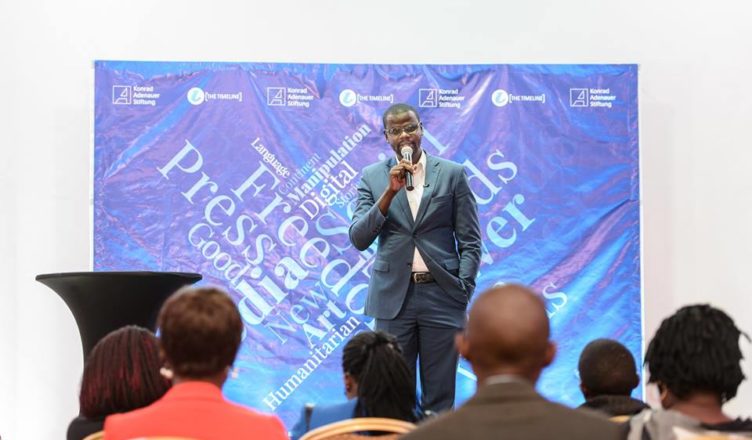 I saw that  tweet and so I asked fellow social good practitioners what they thought –  Sartaj  explained a few things.

Which leaves us, the ordinary people that are faced with the $1 a day problems to get thinking – what can we do to make this World a better place regardless of how much we earn and by use of our social capital which in my opinion is our greatest asset as of now.

This leads to another conversation that was part of the Uganda Social Media Conference held in Kampala, Uganda recently where Philip Ogola shared his story. So, you will not find Philip making headlines with the work that he does – he does so with no money being paid – he is a digital Humanitarian.

Philip is best known for building the Kenya Red Cross Digital Brand not only in Africa but globally.  His first initiative was #iVolunteer – where he was able to rally Kenyans online to become citizen reporters for the Red Cross. RedCross Kenya through data mining was able to respond to people in various locations. It was easy for RedCross to prepare and dispatch teams to those in need because social media according to Philip gives so much data.

His biggest disaster handled was the Westgate Mall attack where he says 7 people died in his arms.

“I didn’t know that I was controlling the whole world – telling stories through Red Cross. Through the power of Social Media we were able to calm the country, issue safety alerts, reunite missing families and even organize for the biggest blood campaign – ONLINE. Unfortunately after West Gate, it was too traumatic – I had to leave RedCross Kenya. That is how I was born as a Digital Humanitarian.”

Under the Digital Humanitarian initiative/brand born 2 years ago – he has been able to cover over 85 schools, where he holds talks about home and safety and ethical practices online both with parents and students.

But Philip doesn’t stop there: He uses his influence as an individual to help people online.

“The biggest I have managed is a rape case – which I have helped solve. It is quite sad – there is a young girl in Nairobi, who met someone on social media, she was raped and wanted to commit suicide. Through my online safety counselling I was able to talk her out of committing suicide.” He narrates.

“In Nairobi I use Social Media to follow things through and put people to account. I have solved a lot of Rape Cases, a lot of Gender Based Violence cases, I have solved over 7 sodomy cases, 35 rape cases plus over 100 traffic offences.  I pick a story online and I just follow with the authorities and make sure the people in wrong are dealt with.” Philip elaborates.

“In Nairobi, we are known as Cyber Bullies. We can focus on cancer, we can focus on economics but sadly we choose to focus on Kenya vs Uganda” He says – lamenting on the choice of battles #KOT choose to pick and fight.

All this Philip does without any backing from any huge institution straight outta SV. In the most humble way – he is trying to solve our local $1 issues – by leveraging the power of social media and technology and off course social capital. He is one of the many whose stories may not make it to CNN or which may never get applauded by peers. But they remind us of why we are here – to help others and use the little we have to create the change that we want to see.