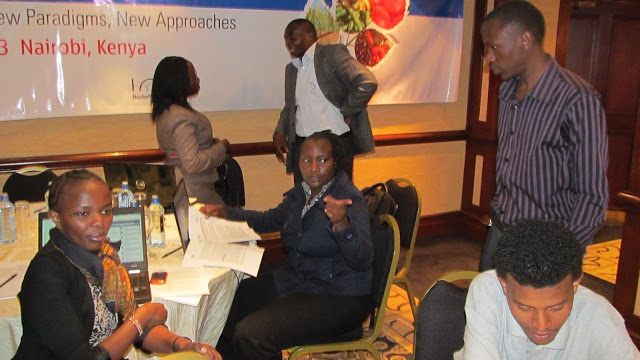 “Does Africa care about it’s image? Do we care about our dignity as Africans? Or are we comfortable with what is out there? Are we okay with the pictures that come out of Africa with hungry children whose ribs are like guitar strings? Because if we did care about that the world perceives of us, then we would do something about it.”

Those were the words of Mr Oby Obyerodhiambo at the just concluded meeting on Food Security in Nairobi. The meeting organized by Society for International Development [SID] with support from the Rockefeller Foundation is one of the first in the Africa Speaker series that is aimed at creating dialogue about the future of Africa as a continent and its people.

These words got me thinking. Sub Saharan Africa today has 265 million people that are hungry. They are neither from the Indian Islands nor from the Maghreb region. 70% of the land in Africa is arable. We by far have the best climate especially in Sub Saharan Africa and our soils at the moment use very little if not fertilizer to be productive. The fertilizer if used is organic. And yet with those credits, the bigger percentages of the people on the continent go to bed hungry. According to the African Development Bank a lot of aid has been given to Africa to help it combat the hunger crisis. Sub Saharan Africa in the last 40 years has received about US $4-6 million per annum towards this cause. Does anyone feel the impact of this money, grant or aid? If so, why are we still hungry?


A number of youth were part of this grand conversation. The majority are practicing farming but on a very small scale. Emmie Wakio, testified to growing vegetables at home in sacks and paper bags on her rooftop in Mombasa because she has not any land to do any large scale farming. She is currently helping out on her father’s poultry farm. But she would love to farm and practice agriculture, a subject she learned and studied up to university level.She is among the many youth that have found not just solace but a profession and career in farming. The majority of youth in Africa have taken on farming as a second choice of career. This is because they already have jobs and commitments elsewhere and farming is more like a long term investment for them. The others don’t want to do agriculture because it had been termed the poor man’s profession. It is a dirty and sweaty activity. The average African youth’s mindset is: ‘I go to school to study so that I can wear a suit to work every morning and not gumboots.’ If we succeed in changing the mindsets of these 21st generation youth, can they feed Africa?

Women today provide 50% of the global workforce that produces food for the world. In Africa, they produce most of their food for their households. The rural woman will till the land, plant the seeds, weed and do the harvest just to make sure that their families are fed. Should there be any land related issues though, the woman will not speak, the man will. When there is produce to take the market, the man will come and claim the revenue. He owns the land; he is the head of the family. That scenario is something what has plagued the Africa setting for decades now. Empower the woman we have said, give her access to financing and not just micro-finance. Enable her get land that she can own. We need to go beyond the rhetoric though. Maybe we need to create systems and policies that will allow families and not individual men to own land. It could help out the women be able to farm more. And if the African woman is empowered to farm and cultivate more, will she feed Africa?

The African farmer is an important part of the food security equation as well. But on this continent, do we have farmers or cultivators? The majority of the African farmers merely farm to put food on the table. They have not so much access to extension services, technology, storage facilities and finances that would help them be better at what they do. They are threatened by the looming danger of Climate Change and its diverse effects which Africa has so much ignored. They struggle with access to markets especially the regional markets. That is who the African farmer is. Given a chance that their challenges were worked out, will they still feed Africa?

The question of who will take responsibility of Africa’s hunger is a big unanswered one. Like Situma Mwichabe said: ‘There is no honor in being hungry.’ More so, eating is a basic necessity. Big or small, tall or short, we all have got to eat. With the present situation, I am irked that the African heads of state would sit to mark 50 years of independence and top of the agenda would be the ICC. Our priorities do not match where we are at as a continent. Policy is driven by men and women who would rather beg than help their own feed themselves. They are comfortable in driving SUV’s and flying in personal jets to go beg for more aid.

As someone noted the other day, former US president Roosevelt spent considerable effort talking to the American People – he didn’t travel abroad for ‘America rising’ conferences. May be that is a recipe our policy makers should try out. Spend more time with the people. Maybe then they will see that they are hungry.

The question remains, who will feed Africa?

2 thoughts on “Who will feed Africa?”