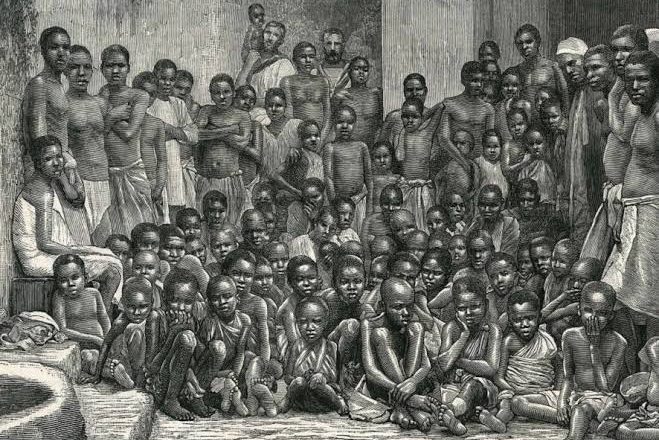 Reparations is a word that you and I be hearing often especially if we are trying to keep up with US politics. Since Candidates started announcing their intentions to run, there has been a buzz about reparations especially from the Democrats. Its a question that the get asked a lot and something that will likely be part of their top agenda.

What made it even more clearer was Trevor Noah’s segment on the Daily Show where he got to really explain what reparations were all about.

… If you are a black person in America, from Slavery, from day one, the number of injustices that have held black people back  in America amount to an insurmountable…. you look at black peoples’ freedom, You look at back peoples land, … the amount of wealth you can acquire if you own land is exponential  because you have the land, you have the fact that you can borrow based on the land, you have the fact that you can use the  money that you have borrowed to grow more wealth, you can use it to grow your family’s wealth ….. just taking that away from black people is crippling them and so you combine that with slavery and you look at Jim Crow laws….. …” Trevor Noah March, 2019.

In July 2017, I had the very rare opportunity to travel to Banjul, the Gambia at the invitation of then UN Permanent Representative of the Gambia to the UN  Dr Mamadou Tangara for an interesting discussion. The discussion was called : The Banjul International Colloquium on Slavery, Slave Trade & Colonialism.

Being in their midst for me was an honour, but also an awakening of a part of me that I never realised that I had. We visited Kuntah Kinteh Island and I was mad – the same mad you see people sharing about after watching When They See Us the 4 part series about the Central Park 5. Mad because Slave Trade was so inhumane. But even more mad because if you survived the Slave Trade journey then your only option was/ would be Slavery. I was invited to talk about the impact of Social Media in leading conversations such as this for the African people.

Dr Lang Fafa Dampha presented a paper citing reparations as a vital component to Africa’s healing economically and otherwise. He pointed out that conferences had been organised by the UN & its special institutions in 1978, 1983,2001, and 2009 on All were held in Geneva apart from the one in 2001 held in Durban, South Africa.

“Reparation claim for slavery and colonialism is not a new issue, because the African peoples both on the continent and in the Diaspora as well as other social groups in the Americas have a long history of demanding compensation for the wrongs inflicted on them, particularly in terms of slavery. For example, in the United States, the Black Panthers in the 1960s recalled the promise of “Forty Acres and a Mule.”” He said.

Mierille Fanon also made this argument for Reparations to be paid to Africa :

“Through reparation, the most important thing is to oblige the former colonizers from Trans – Atlantic trade slave, from enslavement and colonisation to colonialism to repair the situation which saw humanity be broken because of the development of capitalism in its most brutal aspects, which confirms today by the seizure of all the liberal capitalist machine on the state apparatus and is expressed by an endless war conducted against the people so that the system continues on and on, while garnering even more profits.”

The purpose of the said Colloquium was  in the end : ‘to table a United Nations General Assembly resolution on Recognition, Restitution, Reparations () to mitigate the damages that slavery and colonialism have inflicted on African and People of the African Diaspora. This was to be backed by the now defunct government of President Yaya Jammeh. Such a resolution has to be backed by so many leaders of African Nations to be made visible at the UN. With Yaya Jammeh no longer in power, I wonder if the conversation will be continued any time soon.

The 2001 The World Conference Against Racism, Racial Discrimination, Xenophobia and Related Intolerance held in Durban was was a potential source of legal engagement to generate legal proceedings steering the conversations on reparations for Africa. However because the Western nations that were present refused to officially apologise even after they recognized the effects of Slavery, Slave trade & colonialism. Also, African leaders present then brought up other controversies like the existence of slaves in Present Day African countries like  Sudan, Mauritania etc.

Then President Olusegun Obasanjo of Nigeria and Vice-President  of South Africa Jacob Zuma felt that financial compensation was not a rational option, because it risked dividing Africans on the continent and those in the Diaspora.

President Wade of Senegal categorically dismissed the idea of financial compensation for the slave trade calling it “absurd,” because such a crime perpetrated cannot be compensated in monetary terms. Colin Powell also expressed the notion that Africans in demanding reparation are being “prisoners of the past”.

As I see Americans again bring up the conversations on reparations but for them, I ask myself : What about reparations for Africa?

More than the compensation, I would like to see an acknowledgement of wrongs done through Slavery, Slave Trade and Colonialism.

And so I ask: Is this a conversation worth visiting again, Can we sound the drums on this cause but also : Who would take the lead on this conversation? Is it in our interest?

Its important that Africans write this story their way. That school curricular has chapters of this covered in History classes because there is knowledge to be passed on.

African reparation requires Africans in the process to work according to their cultural values and the transformative aspects of these values. The individual African should be part of the collective Africa. The indispensable factors of African reparation in the larger context of socio-economic development are self  discipline, self-respect, respect of African values, rigour, professionalism and genuine adherence to African sociocultural values. — Dr Lang Fafa Dampha